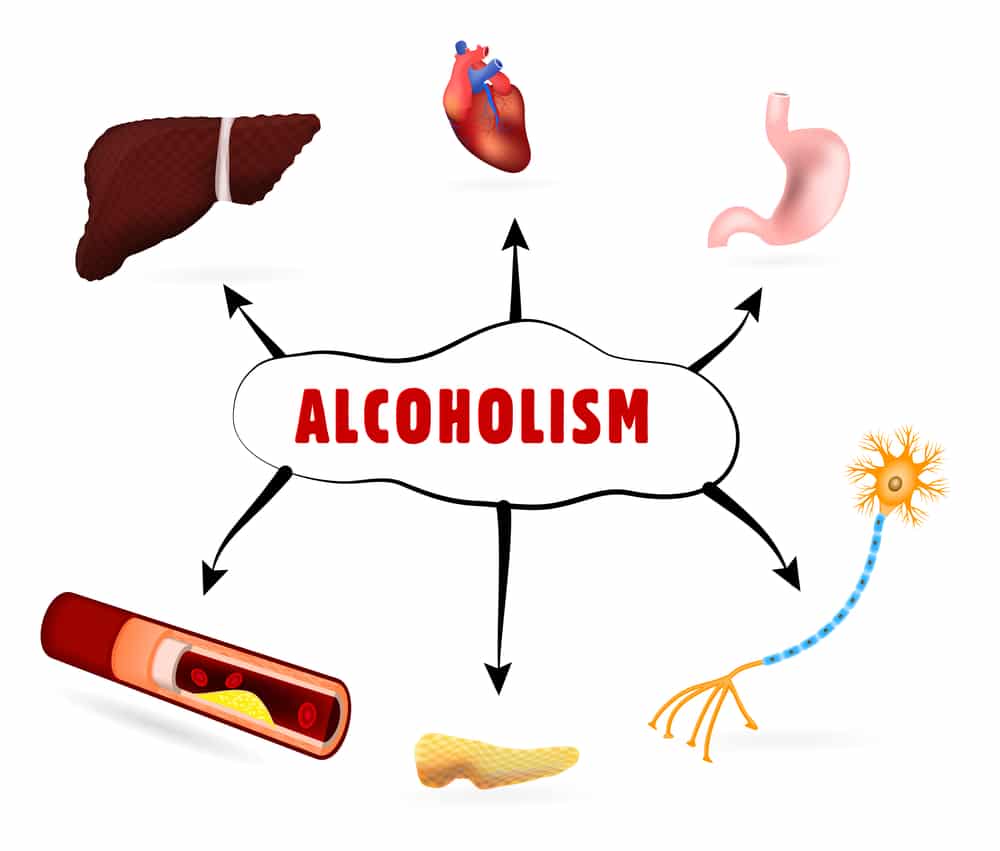 Alcohol is a major depressant and its biggest effect is on the central nervous system.  Alcohol interacts with the receptors, neurotransmitters, cell membranes, enzymes and even the genes.  The breakdown of alcohol is a multi-step process, and the first step is the change to acetaldehyde.   The enzyme that starts this breakdown is called alcohol dehydrogenase.   In men 30% of the alcohol that is consumed is broken down in the stomach, for women it is only 15%.  The rest of the alcohol goes straight into the blood stream.  This is why woman tends to get drunker quicker than men.

Visible symptoms of an alcoholic may be:

Chronic consumption of alcohol stimulates the stomach’s lining, which causes secretion of hydrochloric acid with irritates and erodes the gut’s lining.  This can lead to peptic ulcers, bleeding and even cancer.  Acute and chronic alcohol use may cause gastritis and bleeding from the GI track.  Another cause of massive and sometimes fatal bleeding may be from the esophagus, again due to thinning of the esophageal lining;  known as esophageal varices.   Chronic use of alcohol can lead to abnormal absorption of a variety of foods and vitamins, which can also lead to nausea, diarrhea, vomiting and loss of appetite.

Alcohol often inflames the pancreas.  The pancreas makes digestive juices that break down starch, fats and protein.  It also houses the (Islet of Langerhans), which secretes insulin and is needed to regulate sugar levels in the blood.  With too much alcohol, the pancreas becomes inflamed and the bile and digestive juices cannot freely escape, so auto-digestion of the pancreas can then occur.

The liver breaks down alcohol other toxic substances, produces essential blood components, clotting factors, and helps regulate glucose levels.   The liver is very sensitive to alcohol, and liver disease is one of the physical illnesses most commonly associated with alcoholism.  Acute fatty liver occurs when 30-50% of the dietary calories are in the form of alcohol.  Alcohol hepatitis can follow a severe and prolonged bout of heavy drinking, and alcoholic hepatitis is usually a forerunner to cirrhosis.  Cirrhosis – means scarring and is a very serious and often irreversible disease.  If a patient continues to drink after a diagnosis of cirrhosis, death will follow within 5 years.  Toxic substances that are usually removed from the liver can start to create problems elsewhere in the body and particularly in the brain, which can lead to hepatic coma.  Another problem that occurs with cirrhosis is “ascites”.  As a result of backed upped pressure, the fluid in the tissues of the liver starts to weep directly into the abdominal cavity.

Alcohol causes problems with anemia when too few red blood cells are produced.  Alcohol depletes white blood cells and lowers the immune system and therefore increases susceptibility to infections.  Alcohol also decreases the number of platelets which are a major component of the blood clotting system.

Alcoholic Cardiomyopathy occurs in 2% of all alcoholics, as does, AHMD – alcoholic heart muscle disease.  AHMD is a severe condition with low-output heart failure marked by shortness of breath and dramatic enlargement of the heart.  A variety of cardiac arrhythmias are also associated with alcohol abuse.  Congestive heart failure can occur when an otherwise normal heart can’t keep up with the abnormally high metabolic needs of the body.  High blood pressure and strokes are also of great concern.

The major effect of alcohol is on the central nervous system.  The effect of alcohol on the nerve cells plays a major role with tolerance withdrawal and intoxication.  Alcohol effects the production of many neurotransmitters including serotonin, GABA and norepinephrine.  Alcohol also increases the level of endogenous opiate-like substance which leads to an increase in dopamine activity, especially in the part of the brain that is linked to pleasure and well-being.  Impaired visual ability, impaired motor skills, and slowed reactions also affect the CNS with too much alcohol.

Alcohol actually affects the pituitary gland located at the base of the brain.  This gland secretes a hormone that regulates the amount of urine produced.  When the pituitary is affected by alcohol its function is depressed.  Therefore, too little of the hormone is released and the kidneys form a larger than amount of dilated urine.  Hence, when we drink a lot we keep running to the bathroom.  Problems with the kidneys usually occur because of other disorders going on somewhere else in the body.

In women too much alcohol decreases fertility, and in men libido, impotency and sterility.  When the liver is impaired the sex hormones also become affected.  Decreased amounts of testosterone can cause enlargement of breasts in alcoholic men.  When women drink too much alcohol during pregnancy the fetus can also be affected with Fetal Alcohol Spectrum Disorders (FASD).  These effects may include physical, mental, behavioral, and/or learning disabilities with possible lifelong implications.

High amounts of alcohol may cause the heart and breathing to stop; death can occur.

Alcohol effects the secretions of hormones and upsets the regulation of other glands in the body.  With increased and decreased levels of hormones the question arises about the potential role for cancer.

Alcohol and nutrition, or lack of, severely affects the skin.  Deficiencies of Vitamin B, C, magnesium and zinc seemed to be the most affected, and the skin takes on a dirty tan like appearance when these vitamins and minerals are lacking.

Alcohol interferes with the body’s ability to absorb calcium resulting in weak bones, arthritis, osteoporosis, osteoarthritis, gouty arthritis and septic arthritis.  Muscles become weaker and atrophy.  Pain, spasms, tenderness and polyneuropathy, which is a painful burning of the feet yet an absence of normal sensation, can also occur and may be caused by poor nutrition.

Alcohol depresses REM (dreaming) sleep.  The drinker frequently wakes up many times throughout the night.  It is thought that DT’s and hallucinations could be due to lack of REM sleep.  REM sleep is important as it helps our brains sort out problems and helps relieves stress in our lives.

A black-out is an amnesia-like period that is often associated with heavy drinking.  A person may appear to be acting perfect normally, yet later, the person has no memory of what has transpired.   The short-term memory function is severely and selectively impaired by alcohol while the long-term memory remains intact.

So as you can see, alcohol can affect every cell in the body.