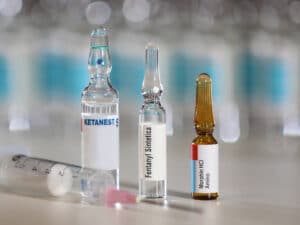 Fentanyl is a synthetic opioid analgesic (or pain reliever). It is up to 100 times more potent than morphine, with 100 micrograms of Fentanyl approximately equivalent to 10 mg of morphine. It is fast-acting, relatively short-lasting and crosses the blood-brain barrier rapidly. The desired effects of fentanyl include a decrease in pain, euphoria and relaxation.

Fentanyl was first made by Dr. Paul Janssen, a Belgian chemist and physician, in 1960 as a strong pain reliever, its purest form being a white powder. Since then fentanyl has taken on a few different forms and roles. Fentanyl soon became available in patch form, then via a flavored lollipop soon being manipulated into sublingual tablets and, sublingual and nasal sprays. Following this, many other fentanyl analogues, or compounds with a similar molecular structure, were developed and introduced into the medical practice. Some but not all include sufentanil, alfentanil, reminfentanil, and lofentanil. Making headlines recently is carfentanil, which is even more potent than fentanyl, and 10,000 times more potent than morphine. When handling something that could be fentanyl or carfentanil, one should be very careful because it can lead to life-threatening consequences. Even just touching and absorbing, or inhaling tiny amounts of these substances can lead to very severe reactions including overdoses.

Prescription Information and Use

In the United States, fentanyl is a schedule II prescription drug, meaning that while it is available with a controlled substance prescription, it is recognized as having a high potential for misuse because there is a high risk for psychological and physical dependence. Fentanyl is so strong it is used primarily to treat only severe pain, breakthrough pain, post-operative pain or with patients who have chronic pain and a tolerance to other opioids. Sometimes it is given during surgery to heavily sedate patients. In 2005, the FDA issued safety warnings regarding fentanyl and reiterated how important it is for prescription regulations and guidelines to be followed when prescribing and dispensing this medication, necessary since in 2015, there were 6.5 million fentanyl prescriptions dispensed, with similar numbers for 2016. It can also be used in veterinary medicine due to its high potency which allows it to be effective for the sedation of large animals.

Some types of prescription fentanyl: 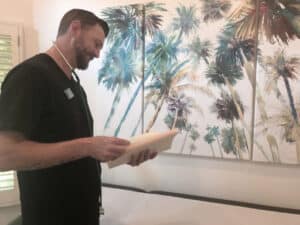 Fentanyl is mostly produced in China and Mexico and due to its increased availability internationally, criminal organizations are adding fentanyl to their products like Heroin to increase their strength. The first illicit fentanyl was discovered in the United States in 1990’s. The Drug Enforcement Administration (DEA) believes it to be one of the first examples of fentanyl actually made in the United States and traced it back to Wichita, Kansas and seized two labs and around 40 more pounds of fentanyl. This specific fentanyl was known as “Tango and Cash,” and it was heroin mixed with about 12 percent fentanyl. This Fentanyl and Heroin mixture was responsible for approximately 126 overdose Opioid deaths. Other common street names for fentanyl are Apache, China Girl, China Town, Dance Fever, Friend, Goodfellas, Great Bear, He-Man, Jackpot, King Ivory and Murder 8.

In the 2000’s, law enforcement dismantled several illegal fentanyl labs throughout the country. Despite this, there began an alarming trend of overdose deaths, concentrated in the Midwest and Northeast, from Chicago to New Jersey. Between 2005 and 2007, there were 1,013 overdose deaths attributed to a combination of heroin and fentanyl. Now, many overdoses are attributed to counterfeit medications containing fentanyl and related substances leaving people unaware of what exactly they are getting. China and Mexico are now the main producers of illicit fentanyl. Fentanyl from China is higher in purity but lower in volume. Fentanyl from Mexico is higher in volume but lower in purity. Lawmakers made an agreement with China in 2017 to better regulate several substances related to fentanyl. Fentanyl also sometimes arrives in the Unites States via Canada. The internet plays a major role in the distribution of fentanyl and other synthetic opioids. Legitimate fentanyl remains an issue but seems to be diverted on a much smaller scale.

In 2014, the DEA formed a task force called the Heroin-Fentanyl Task Force (HFTF). The HFTF is meant to bring together multiple branches of government to deal with opioids such as fentanyl, currently consisting of the Customs and Border Protection (CBP), DEA, Federal Bureau of Investigation (FBI), Internal Revenue Service (IRS) and the United States Postal Inspection Service (USPIS).

Fentanyl is a powerful medication to help people manage their severe pain. It is important that people who truly need it have access to this strong opioid. However, it has recently become a major player in the opioid epidemic. It has been associated with many fatal overdoses, including the overdoses of beloved celebrities. This fentanyl is often not obtained by a prescription, but instead manufactured in illegal and unregulated laboratories overseas. Illegal fentanyl is often sold as a powder, on blotted paper, mixed in with heroin or disguising itself as other prescription opioids. Fentanyl is scary because it is easily substituted for what the person actually thinks they are obtaining, but it is much stronger and more lethal. It has been found impersonating oxycodone, hydrocodone and alprazolam. It has been found increasingly in “speedballs”, a mixture of cocaine with heroin or morphine, and also combined in a very strong mix called “Grey Death” which can include designer drugs as well as heroin and opioid analogues. Criminal organizations use fentanyl as substitutes because it can drastically increase their profit margins. Law enforcement said people will actually seek fentanyl out, despite the dangers of Fentanyl, because of the intense rush. At AToN Center, we have seen people intentionally and unintentionally use fentanyl. They reported having an intense initial rush but then experiencing a subsequent inability to get high. People also mix fentanyl with other substances in order to increase the high; this can be very dangerous due to respiratory depression. People also report altering legal fentanyl in order to circumvent the time-release mechanism, which, again, can be very dangerous.

Side Effects and Signs 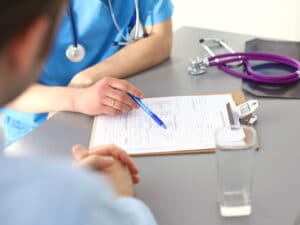 Signs of an Fentanyl Overdose

Signs of a fentanyl overdose include, but are not limited to, being unresponsive to voice or touch; slow, stopped or irregular breathing; extreme pinpoint pupils; blue or purple tint to fingernails and lips; slow heartbeat and low blood pressure.

Signs of Fentanyl Abuse or Misuse

Signs of fentanyl abuse or misuse include paranoia, any marked behavior changes, social withdrawal, decrease in motivation, pinpoint pupils, constipation, long periods when the person is unaccounted for, decrease in performance at work or school, changes in spending habits or financial changes, mood swings or changes in peer group. 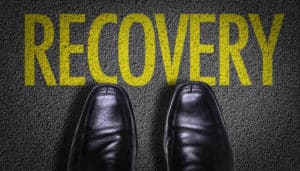 AToN Center treats all opioid use disorders including fentanyl. Treatment involves a safe detox, intensive inpatient therapy, exploration of Medication-Assisted Treatment (MAT) medications, discharge planning and aftercare. At many addiction treatment centers, treatment is one-size fits all. At AToN, our approach is consistently individualized. We offer 12 Step fellowship programs and many non 12 Step alternatives. We are supportive of whatever works for you to help treat your addiction to fentanyl and other substance use disorders or mental health concerns. We are knowledgeable and supportive of SMART Recovery, Refuge Recovery, Celebrate Recovery, LifeRing and any other community support group that works for you. We also support you connecting with whatever spiritual pursuits might be helpful (if any) and we offer a range of holistic services such as massage, acupuncture, equine therapy, personal training, hypnotherapy, breath work and yoga. Doing these behavioral holistic activities is so important to help get through the challenges of Fentanyl Withdrawal, fentanyl detox and the post-acute withdrawal syndrome (PAWS) which can derail people if they are not educated on the process. When you call AToN Center, a trained admissions specialist will walk you through the process and answer your questions.

More and more people are unfortunately calling after attempting to manage their fentanyl addictions on their own, so we know what it takes to get you going in the right direction. Once in treatment, you will receive a unique Master Treatment Plan, created specifically to meet your treatment needs. Many people who come to our treatment center have needs for dual-diagnosis treatment, which in this case means someone that requires help for a substance use disorder and underlying mental health concerns. While treating both, we look at the important interplay between how our mental health impacts our addiction and vise versa. We use a plethora of treatment approaches targeted to meet your needs. These include: Cognitive Behavioral Therapy (CBT), Acceptance and Commitment Therapy (ACT), Dialectical Behavioral Therapy (DBT), Motivational Interviewing (MI), trauma-informed treatment (including Eye Movement Desensitization Reprocessing, or EMDR), Family Systems Theory and a systemic approach. We are progressive and do not force labels on clients such as “addict” or “alcoholic” (If people want to call themselves addicts and alcoholics we are all for it, we just are not going to make that determination for you). Our treatment is continuously revised through a methodical approach and is empirically validated to be effective. We also track outcomes and have the statistics to back up our data.

With fentanyl, an individualized treatment plan will start with a personalized detoxification plan to make you as safe and comfortable as possible while you detox. You will meet with our medical director and a psychologist shortly after you arrive to assess your initial medical and psychological needs. We will develop a treatment plan and help you to learn, practice and implement vital behavioral skills to ensure your success in recovery. We will then help you explore your options with medications, such as Vivitrol and Naltrexone, which have been shown to reduce opioid cravings – including fentanyl. Discharge planning will remain a focus of clinical attention throughout treatment because we believe treatment is just the first step in a lifelong journey of recovery. Fentanyl is so strong and powerful and you will need all of the aftercare support possible to maintain motivation and manage cravings. We will be with you every step of the way. Our foundations are: Cope with cravings, manage emotions, balance your life, maintain motivation, nurture healthy relationships, and live with a higher purpose. We will apply these principles to your recovery from fentanyl and any other substances that are holding you hostage.

Writer’s note: I hate scare tactics in the addiction field. To me, the truth is terrifying enough without an exaggeration of stats or trying to make people scared. I don’t need to be dramatic because the reality speaks for itself. But with fentanyl, the destruction is on another level. Before, resuming substance use used to be a gamble… a game of Russian Roulette where you didn’t know if you’d make it back into recovery or not. Fentanyl has literally turned relapse into a death sentence. We’ve seen too many people have an innocent slip and end up dead because fentanyl was in their counterfeit pills or heroin. We’ve lost celebrities and dear friends. Prince’s death was just one of the major celebrity deaths attributed to fentanyl. It was never safe out there, but fentanyl has turned using into a nightmare. Please be careful and stay informed. Stay safe. Get help early and often. We’re here to help.

Most statistics and facts from this article come directly from the following sources: