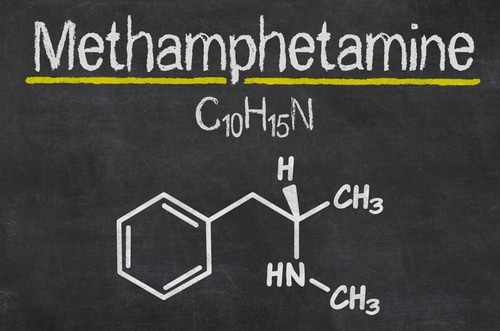 Methamphetamine is a highly addictive stimulant that affects the central nervous system.  It can be snorted, smoked, injected or ingested.  In its smoked form, it is often referred to as ice, crystal, crank or glass.  The drug was developed in the 20th century from its parent drug amphetamine and was originally used as a nasal decongestant and bronchial inhaler.  Today, it is used by doctors for narcolepsy and attention deficit hyperactivity disorder. Methamphetamine creates a false sense of well-being and increased levels of energy.  It makes the user push his/her body further than it is meant to go.   Methamphetamine is a Schedule II stimulant and highly addictive.

Long-term effects would be:

When people use Methamphetamine, it changes their lives in varying degrees depending on the route of ingestion.  There are three levels of abuse.

Low Intensity Meth Abuse – Users that snort or swallow the drug do so because they want to stay awake long enough to finish off a job or as an appetite suppressor.

Binge Meth Abuse – Users smoke or inject Methamphetamine with a needle.  They are seeking the intense rush that Meth gives them.  This method of use is more psychologically addictive.

High Intensity Meth Abuse – Users are often called “speed freaks.”  They are continually using Meth so they can prevent the crash.  The crash is the painful letdown when the body shuts down and is no longer able to cope with the drugs overwhelming effects.  The crash also refers to the long period of sleep that the body needs after being awake for days on end.

Tweaking – Is a term used when the Meth user has reached the end of a drug binge and is no longer able to get a rush or high.  The Meth user experiences horrible feelings of emptiness and cravings.  They may also experience intense itching and are convinced that there are bugs crawling under their skin.  Having not slept for days the user is often psychotic and is starting to see and hear things that no one else can perceive.  At this point the user may become a danger to self or others.

Withdrawal – Thirty to ninety days may pass after the user last drug use before realizing he/she is in withdrawal.  Symptoms of withdrawal include:  Depression, loss of energy, and the inability to experience pleasure, followed by cravings.  Since the withdrawals are so painful the user often returns to abusing Meth.  There are currently no specific medications for counteracting the withdrawals of Meth, however recent studies are finding that bupropion, Wellbutrin can reduce the “high” as well as drug cravings.

Sexual Behavior – Methamphetamine has also been linked with risky sexual behavior among men and women and may be because it increases the libido.  The risk of hepatitis B, hepatitis C, and HIV is another major concern mainly due to re-use of contaminated and shared syringes.

Treatment – The most effective treatments for Meth addiction are behavioral and cognitive behavioral therapy along with education, individual counseling and self-help meetings.