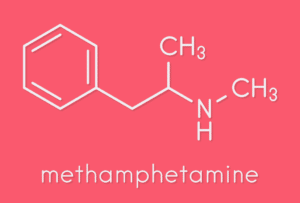 Methamphetamine is a synthetic stimulant that effects the central nervous system. The production of meth involves mixing harmful substances and toxic chemicals. Methamphetamine has been determined to be the second most abused illicit substance in the United States. Methamphetamine addiction most commonly occurs in individuals between the ages of 12 and 25 years of age. Rates of meth abuse and dependence are significantly higher in younger age groups. Meth is found most predominately in crystal form but can also be used as a powder or paste. There are many ways meth addicts abuse this highly addictive drug. Meth can be snorted, ingested, inhaled, and injected. Intravenous use is the most dangerous of these methods. The health risks of meth addiction are greatly increased with this type of administration. Meth addicts commonly abuse other illicit substances in addition to methamphetamine. Marijuana, alcohol, and opiates are typically substances abused comorbidly with meth. The most significant risk of poly substance abuse with methamphetamine is the increase of toxicity. The risk and severity of physiological and psychotic symptoms increases as toxicity rises. Many people associate meth addiction with the severe damage seen in dental health. Meth addicts commonly experience teeth grinding, jaw pain and rampant tooth decay.

Meth goes by many names. Meth addicts refer to methamphetamine as speed, ice, crystal, glass, meth, or kryptonite to just name a few. Physical dependence occurs rapidly and traps a meth addict in a desperate cycle of addiction. The consequences of meth addiction are devastating to the addict and their loved ones. Meth contributes to psychiatric illness, cognitive impairment, and major medical issues. Meth abuse can devastate finances, relationships, career goals, and have serious legal consequences. When an addict becomes physically dependent on using meth, withdrawal from methamphetamine is tremendous. Cravings are overwhelming and result in significant discomfort. The severity of meth withdrawal contributes to the probability of relapse. Withdrawing from meth includes severe mood swings characterized by agitation, depression, and profound state of dissatisfaction. Acute withdrawal symptoms include spike in anxiety, distress, poor concentration, irritability, fatigue, sleep and appetite disturbance. The most intense experience of withdrawal symptoms is in the first 7-10 days of abstinence. The intensity of these symptoms often requires the support of professional treatment. The ability of the individual to cope with the intensity of withdrawal from meth addiction is pivotal in planning for relapse prevention. 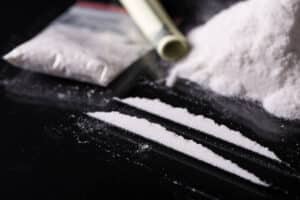 The complications of methamphetamine addiction can have lifelong consequences. High risk behaviors put the addict in jeopardy of harm and increases as the addict continues to abuse meth. Methamphetamine addiction results in severe health risk as well as vulnerability for psychopathology. The most common experiences of psychopathology in meth addicts are psychosis, anxiety, and mood disorders. Behaviors are often highly impulsive, sporadic, and violent. Methamphetamine dependence and abuse can result in severe cognitive impairment. Cognitive deficits for problem solving and memory are common. These consequences have substantial effect on day to day functioning.

Methamphetamine’s Effect on the Brain 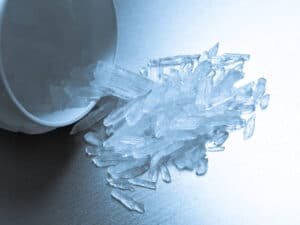 Meth addiction damages the limbic system in the brain. The limbic system is associated with emotion, behavior, and motivation. The damage and disruption of this part of the brain results in suffering of intense and overwhelming emotions for the meth addict. Many of the short term and long-term symptoms meth addicts suffer with are related to the damage done to this part of the brain. The ability to regulate emotion and behavior has been impaired. The effect of this damage to the brain is a dysregulated emotional experience and chaos of experience and relationships. The impairment of the brain can persist six months or longer after withdrawal from methamphetamines. It has been determined that detoxification of the brain may require more than a year. 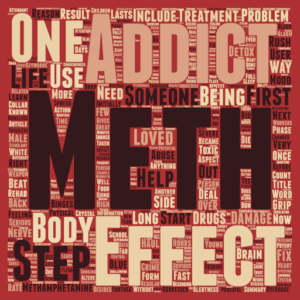 The most common manifestation of psychosis in methamphetamine addicts includes delusions and hallucinations. Meth addicts will report overwhelming feelings of persecution and mind reading. Paranoia and inability to trust complicates and devastates relationships. Auditory and visual hallucinations create confusion and anxiety for an individual addicted to meth. The intensity of delusions and hallucinations when withdrawing from meth can last from 7 days to indefinitely. An individual suffering from these psychiatric symptoms induced by meth addiction experience intense mood swings. The rapid and severe fluctuation of mood is stressful for the individual. Behaviors can become hostile or violent toward others. Mood can become predominately depressed and agitated. These psychiatric symptoms can result in hospitalizations due to risk in safety for self or others. It is estimated that almost 31% of methamphetamine addicts will experience these severe psychiatric symptoms. There are a lot of factors that can affect the chance of a meth addict becoming vulnerable to these devastating psychiatric symptoms. The longer an addict abuses meth the more likely these symptoms are to occur. The intensity and quantity of meth abuse has severe implications on possibility of symptoms. If an individual already has a history of psychotic behaviors and symptoms the likelihood of these symptoms being made worse by meth abuse is very high. When an individual has a psychological diagnosis such as bipolar disorder or schizophrenia, typical symptoms experienced with these disorders can be exacerbated by the abuse of meth. The unpredictability and impulsivity associated with these psychiatric symptoms create a staggering risk for harm to self and others. These behaviors create incredible harm and can result in life threatening consequences. Violent behaviors in particular are common with those addicted to meth. Heavy use such as intravenous administration increases the possibility of violent behaviors. A significant percentage of meth addicts are involved in violence and criminal acts. These violent crimes include assault toward others while under the influence of

Mood disorders such as depression and anxiety are common in methamphetamine addicts. Prolonged depressed mood as a consequence of meth addiction results from a combination of influence on the brain and consequences to the life of the addict. Neurotransmitters that support the regulation of emotion have deteriorated with needed chemicals such as serotonin and dopamine depleted. The earlier an individual becomes addicted to meth the likelihood of depression rapidly increases. Highly levels of anxiety result from the influence of the stimulant and exacerbated the sense of urgency during withdrawal and risk for relapse. 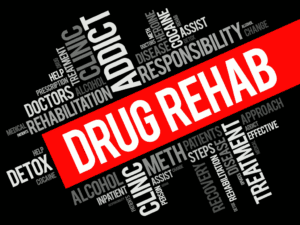 There are no approved medications for the treatment of methamphetamine addiction. The most effective treatments for meth addiction are the evidence-based approaches of Cognitive Behavioral Therapy (CBT), family therapy, and behavioral modification. Recovery counseling and relapse prevention will be essential to an effective treatment approach. CBT combined with motivational enhancement, 12 step programs and other community support meetings such as SMART recovery can provide a comprehensive treatment approach. An individual, family member, or friend who believes that someone is in need for therapeutic intervention to address addiction can seek referrals for treatment with any medical or therapeutic provider. Common treatment levels for meth addiction would be residential or intensive outpatient services. A treatment facility will ideally address any comorbid addiction to other substances, psychiatric and mood disorders, as well as trauma.