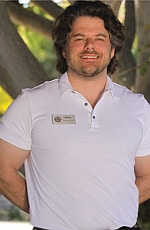 William has been fortunate to reside all over the country. He earned his B.A. in Psychology from Boise State. He spent many years, in Southern California, coaching high school and small college football. He is regarded as a student of the game, and an Indianapolis Colts fanatic. At a taping of Seinfeld, he asked Jerry Seinfeld what his favorite Band was…to which he replied… “Cake.” In Los Angeles, and later in San Diego, he began his work in recovery. Making a difference in residents’ life provides his life with ultimate purpose.