AToN Center strives to be the most cutting edge, evidence based program available for treating substance misuse. In alignment with this aim, we have been reporting our research and outcomes since 2011.

In an effort to step up our game even further, we have joined with a third party, Vista Research Group, who has begun monitoring our outcomes. This group not only monitors our resident’s weekly progress, but they also contact our residents periodically after their discharge in order to give AToN feedback about our Alumni outcomes.

The intention of this move is twofold. First, as our outcomes will be monitored by a program outside of AToN, our numbers can be trusted even more! We all know that many programs “fudge” numbers in an attempt to place their center in positive light. This un-biased group verifies AToN’s honesty!

Second, despite our amazing results, we have been unable to compare our outcomes with other programs. The Vista Research Group represents a number of treatment centers so our results are compared to national norms AND these other treatment centers using the same group.

AToN Center just received our first “Treatment Effectiveness Report” and we are delighted to share this report with you! This report is broken into three major portions: Patient characteristics upon intake, progress during treatment and treatment success. Our data is from 114 residents who attended treatment at AToN between September 2017 and June 2018. 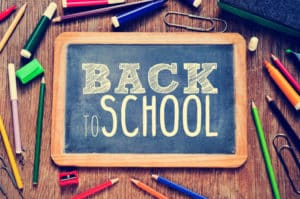 While AToN Center if a substance use primary program, our clinical staff is highly equipped to treat dual diagnoses. Upon intake, 68% of the respondents reported moderate to severe symptoms of depression. Anxiety was also highly reported with 63% endorsing moderate to severe symptoms. Of our residents, 54% reported symptoms indicative of post-traumatic stress disorder. Of note – four of our full time psychologists are either certified in Eye Movement Desensitization Reprocessing (EMDR), or in the process of being certified in EMDR with the EMDR International Association (EMDRIA).

In comparison to national norms, AToN Center has an exceptionally high treatment completion rate (69% versus the national norm of 56%). Of note, this does not take into account that 9% of our residents wanted to continue treatment, but had to discharge early due to their insurance companies denying them further care. If we take those numbers into account, then 78% of our residents completed treatment. This is not to say that AToN Center does not discharge residents who are violating AToN rules or causing disturbances in our milieu – our rate of termination is the same as national norms (6%). Another exceptional statistic is that AToN’s rate of residents who discharge “Against Medical or Clinical Advice” (AMA/ACA) is lower than the national average (14% in comparison to national average of 18%). Despite this positive feedback, AToN Center’s Administrative and Clinical Team is researching and brainstorming ways to decrease our AMA/ACA rate by intervening with those residents who are at high risk for this type of discharge early on in their treatment. 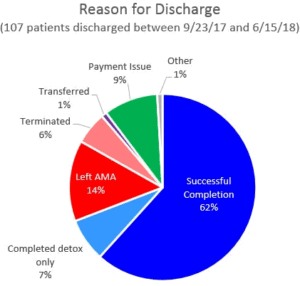 This feedback helped AToN Center identify our strengths and weaknesses as a program – and is driving our performance improvement goals. AToN will continue to present our program evaluations in an effort to remain transparent and accountable to our past, present and future residents.

AToN Center holds itself to the highest standard of care, and is firmly rooted in the scientist-practitioner model.  In an effort to provide the highest quality of service, our San Diego treatment center continuously assesses the psychological dynamics of each individual entering treatment, and assesses treatment outcomes of outgoing residents.  The research and leadership team at AToN Center believes in letting data drive policy, and uses only appropriate, valid and reliable measures to assess our performance.

Here is our ongoing research for your review:

Our goal is to exceed your expectations.  Call us today if you or a loved one is seeking an ethical, high quality San Diego treatment center with successful substance abuse treatment outcomes. Our private rehab program is limited to a total of 24 clients, 6 per residence to ensure quality of care.