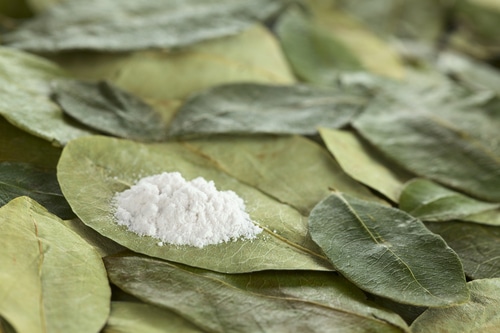 Cocaine is an extract from coca leaves and is a highly addictive stimulant.  As far back as 3,000 BC, the Incas in South America used to chew the coca leaves to speed up their breathing and counter the effects of thinning air in the high elevation of the Andes.  Later, native Peruvians also used the coca leaves for religious reasons.

In 1859 Albert Nieman extracted cocaine from the coca leaves. In the late 1800’s Sigmund Freud used cocaine and also gave it to his patient to help with depression and sexual impotence.  In 1886 John Pemberton added cocaine to the drink, coca cola; it was removed in 1903 due to its addictive qualities.

In the 1970 the Columbian drug cartel set up a very successful smuggling network to supply the US with cocaine.  As of 2008, cocaine is the second most trafficked drug in the world.

There are two different forms of cocaine; the hydrochloride salt and the freebase.  The hydrochloride salt dissolves in water and can be taken intravenously or snorted into the nasal passages.   The freebase form of cocaine is smokable.  On the streets cocaine powder is called: “Coke,” “C,” “snow,” “flake” or “blow.”  “Crack” is the street name for the freebase.  The term “crack” comes from the sound it makes when it is smoked.  Crack cocaine is processed using baking powder and ammonia and heated to remove the hydrochloride.  It is a less expensive form of cocaine, but still highly addictive.  Cocaine can be chewed, snorted, injected, mainlined or smoked.

A very dangerous combination is Alcohol and cocaine taken together, as they convert to cocaethylene in the body.  Cocaethylene is longer lasting and is more toxic than either drug alone.  This combination can often lead to death.

Help for addiction to cocaine

There are currently no medications approved by the FDA to treat cocaine addiction.  However, Topiramate, baclofen and modafanil are showing great promise in the research field.

Cognitive-behavioral therapy, residential and outpatient program are still very effective forms of treatment, along with group therapy and self-health meetings

US Department of Health and Human Services – Research Report – Cocaine